Strange Features in the Northumberland Hills

Strange Features in the Northumberland Hills 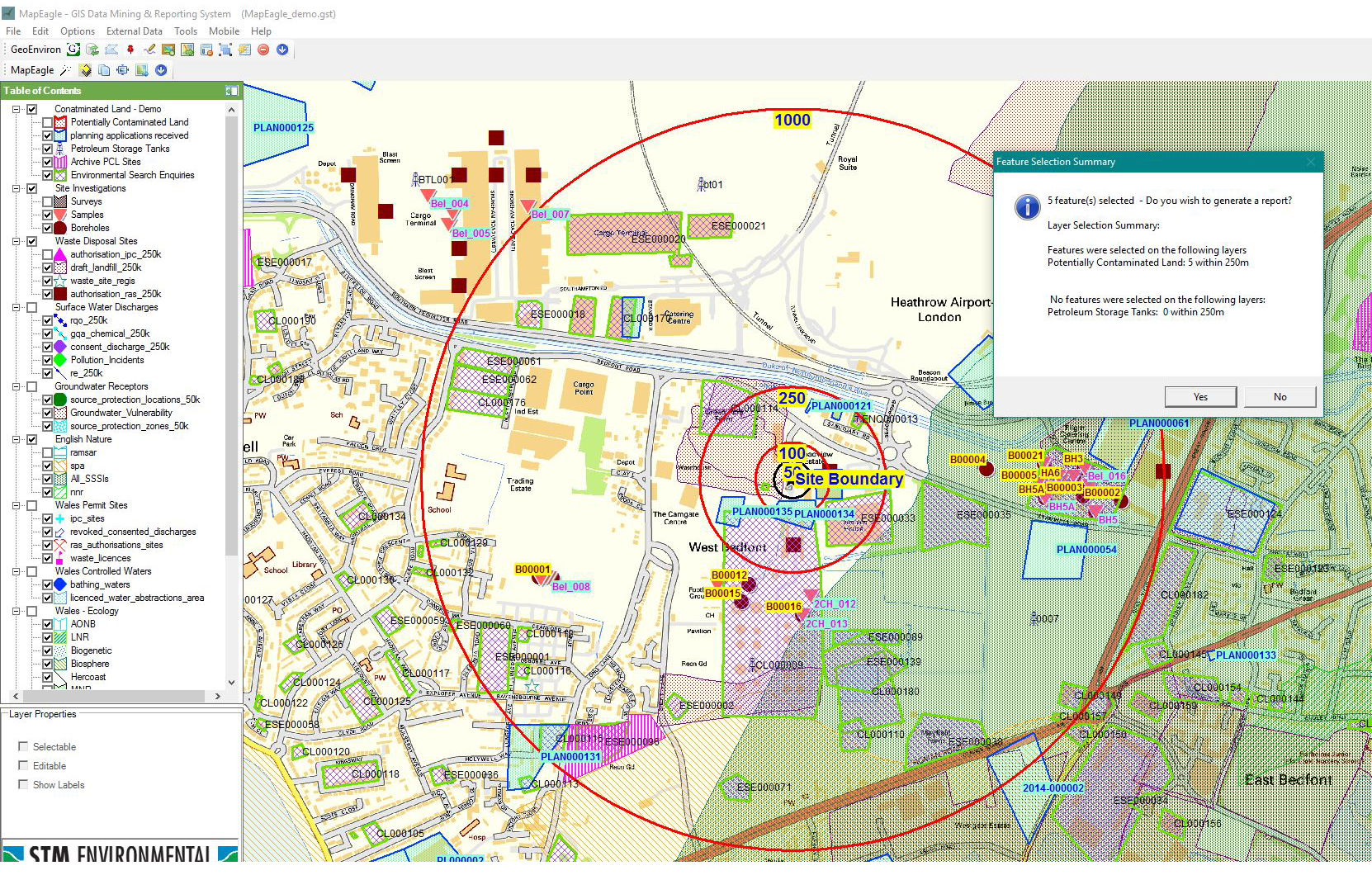 When STM Environmental reviewed Historical Maps for the newly formed Northumberland Council Unitary Authority last year, one of the unusual map features we encountered were strange lead smelter flues, sometimes stretching for hundreds of metres in different directions from a lead smelter and many are still visible on current aerial photography. We decided that a little research might be interesting.

Northumberland Council chose to use the GeoEnviron Contaminated Land Module to manage all their potentially contaminated land data which of course meant pulling together data from all six councils. As you would expect, not all the authorities had the same quality of data and the decision was made to revisit the historical mapping and produce new GIS layers for each epoch of historical mapping. A final composite layer was then to be produced with varying boundaries across epochs being merged. Although it took a little longer it was decided that each site should be plotted as a polygon with no line or point data so that the layer was effective for planning screening work. Each polygon was linked to the GeoEnviron database. Spatial analysis and review of both current mapping and aerial photography supplied all the information required to complete a Stage 1 prioritisation of all 10, 500 sites on the final layer.

Plotting historical-use polygons requires a thorough understanding of contaminated land work, understanding how features evident on historical maps relate to their historical use and where the boundary is best drawn for both Part 2A work and for planning screening. The work is rewarding, however, an opportunity to look through old maps being a joy in itself. Whenever STM undertake this kind of work, we are particularly interested when we come across features that are unique or especially relevant to an area which brings us back to the lead mining features in Northumberland. 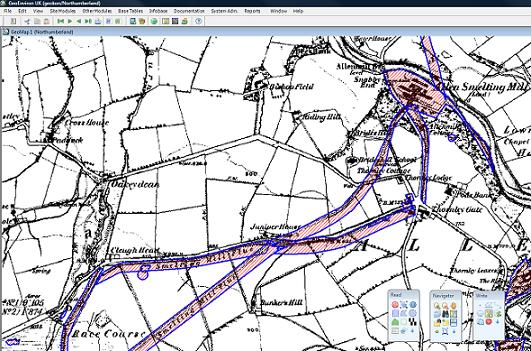 Britain was the world’s leading producer of lead between the mid 18th and mid 19 centuries. The most important area of lead mining in this period was the North Pennine lead field, including South Tynedale and the Derwent Valley, both predominantly located in Northumberland. (STM also carried out similar work for Durham County Council which as well as covering parts of the Derwent Valley also includes both Weardale and Teesdale, part of the same lead field.)

Interesting features easily picked up on historical mapping include drifts, hushes and smelting mills, as well as lead smelter flues with associated chimneys. Early lead mining used an open cast technique known as hushing whereby streams were damned and the water released into man-made trenches to expose lead from beneath layer of soil and peat. Many of the resultants valleys, up to 800m long and 30m deep are still evident today on both maps an aerial photography. Hushes are often labelled as such on historical maps. Later mining techniques of mining lead included tunnelling “drifts” into the valley sides, again easily identifiable on historical maps. The resultant lead ore would be stripped and cleaned of waste before crushing and transporting to smelting mills, each of which might support several mines. The tracks or “tramways” along which horses would haul the lead are again identifiable on maps, as are the smelting mills themselves, where the lead would be formed into ingots. 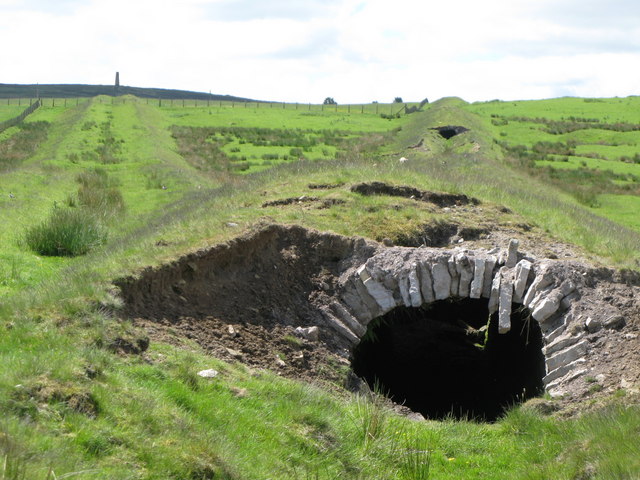 “Lead Smelter Flues”, serving the smelting mills ran for several kilometres into the countryside away from the mill, each ending in a chimney. Allendale Mill in particular was served by several such flues running in different directions. They form interesting and unmistakable features on both historical maps and often on current aerial photography.. It is unclear from the sources I have read just why these flues were so long. The chimneys would remove waste combustion products from the work area but I surmise that they would have also drawn enough air to feed the smelting process. It is also documented that lead (and silver) compounds would condense out on the inner surfaces of the flues which might run for several kilometres in various directions. Children would have been used to scrape the inside of the tunnels at intervals to recover this valuable “waste” product. Is this the reason for the length of the flues?

According to one text on the history of lead mining in the North East (ref1), ……by the mid-nineteenth century, the general opinion was that a well ventilated mill was a much more healthy environment than were the mines. This was the result of the building of long flues which was undertaken not entirely for humanitarian reasons as the evidence of John Robinson, the agent of the Derwent Lead Company indicates:

“To save the surface of the land from injury, we carry from the smelting hearths a tunnel arched a mile long, and let the smoke up by a chimney. At the end of the year, we clean the chimney, and smelt the matter obtained, called fume, and get from this a great quantity of lead, sufficient to remunerate for the expenses of making the tunnel, and yield a profit besides.”

Some flues were fitted with condensers, virtually similar in operation to SO2 scrubbers on power station chimneys – the gases passed through a spray of water which “captured” particulates containing the lead oxides. The Langley flue shows a condenser in the 1850s-60s before the flue was elongated to where the Stublick chimney is now. 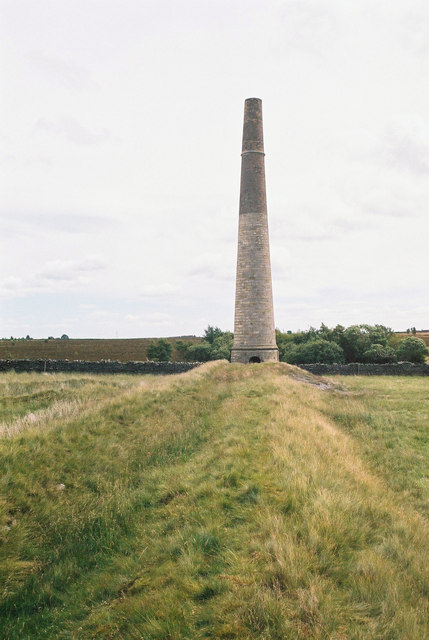 The entire layout of Langley Mill still survives as earthworks along with Blaghill Mill. The two represent a complex lead works and and are a scheduled ancient monument along with a flue and chimney. The chimney itself is Grade II listed. Perhaps for this reason the Langley Mill appears to well documented, although, also in Northumberland the Allendale Mill was more significant in terms of size and presumably output It was certainly this mill that originally caught our eye as we scanned pre-war historical mapping for the area.

The reason for plotting the flues for Northumberland Council was obviously there significance in terms of potential to have contaminated the land they pass over. In actuality, the rural nature of the greater length of these flues essentially seems to preclude redevelopment so they remain an interesting feature of the Northumberland landscape and a record of once successful industry which has now passed into history.